Chicken in Lemon Cream with Penne 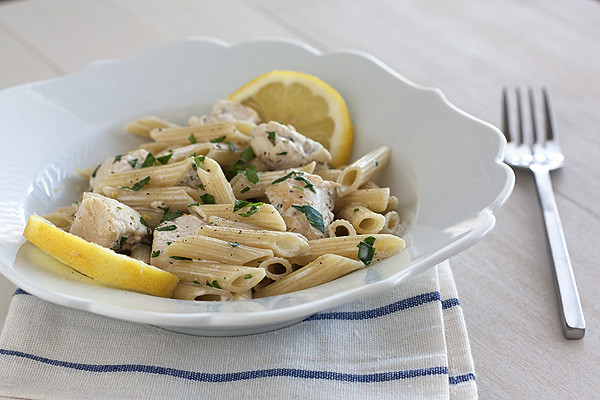 Sometimes despite how hard we work at something, it just doesn’t work out the way we intended. When there’s a problem in my life, I will work at it almost incessantly until I solve it. I’ve come to realize, though, that some problems can’t be solved. The problem isn’t in your control. You either have to wait it out, hope someone else with the control will fix it, or get over it. Those things aren’t easy for me.

You might be wondering what the heck I’m talking about but I won’t bore you with the details of my pathetic problems. But there is one thing I feel I ought to share as it relates to this blog. As many of you may know, for the past year I’ve been attending culinary school along with taking (many) regular general education classes. The culinary arts program I’m in is experiencing massive growing pains and was planned to be in a new facility this semester. But less than a week before classes begun I discovered things had fallen through and we wouldn’t be in our new facility but in a temporary facility. Classes would only be offered at the same times on the same days, preventing me from taking a full coarse-load of culinary classes.

That means that until we have a new facility, which there is no guarantee will happen even within the next year, I’m limited to taking a part-time coarse load. It will take me much longer to graduate from culinary school than I ever planned for. And I don’t like to waste time. I like to feel productive.

So I did some research on my options and discovered that I could transfer in Spring 2012 to an Arizona university and *hopefully* graduate with my bachelor’s degree by the end of Fall 2012. By that time I’m hoping the culinary program will be in a new, big, bad facility. Then I’ll have both a bachelor’s and a culinary degree. We’ll see what happens.

Now, enough about my school problems and more about this pasta. It’s indulgent, yes. But it’s also fresh and surprisingly easy. You can have a restaurant-quality dish at home in less than 45 minutes, if it even takes you that long. Doesn’t get better than that!

Texture: The sauce is creamy without being cloying and the chunks of chicken are moist and meaty.
Ease: Very easy, would make a beautiful weeknight meal.
Appearance: Looks pretty tasty to me.
Pros: Easy and perfect for both a weeknight meal and an elegant dinner party.
Cons: Not exactly light!
Would I make this again? Yes.

Bring a large pot of salted water to a boil over high heat. Add the pasta and cook until tender but still firm to the bite, stirring occasionally, 8-10 minutes. Drain.

Meanwhile, heat the oil in a large, heavy skillet over medium-high heat. Season the cubed chicken breast with the herbes de Provence and a pinch of salt and pepper. Cook the chicken until golden brown, about 5 minutes. Using a slotted spoon, remove the chicken and set aside. Pour off any excess oil from the pan. Add the chicken broth to the pan and cook over medium-high heat, using a wooden spoon to scrape the brown bits off the bottom of the pan. Add the cream, lemon zest, and cayenne. Reduce the heat to medium-low and simmer for 10 minutes.

Add the pasta, chicken, 1/2 teaspoon salt, 1/4 teaspoon pepper, chopped parsley, and lemon juice. Toss to coat the pasta and chicken with the sauce and serve.

Have you made this Brown Butter Coffee Cake yet?!