Filed Under: Italian | Side Dish 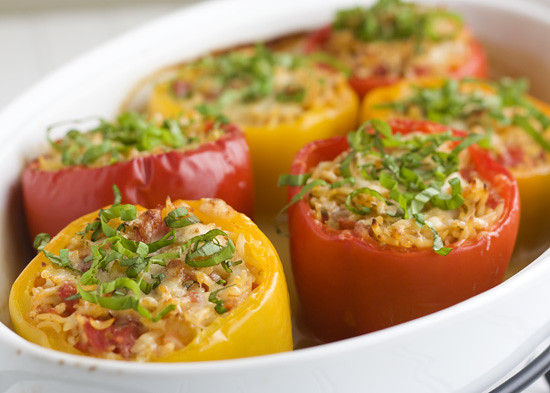 Spring makes me think of bright, bold, pretty colors. I bet it makes you think of that too. That’s one of the reasons I was drawn to this dish, it’s just so beautifully bright! Not to mention lately I’ve been seeing a lot of stuffed peppers around online, on television, in restaurants. Sometimes a recipe, food, or idea just haunts you until you make it/eat it.

So with the idea of stuffed peppers in my head I scoured my ever-growing collection of cookbooks and found this recipe from Giada. It was simple enough and I loved that it used orzo so I was off to the kitchen to cook. And now I’m at my computer blogging, with a lot of chopping, boiling, baking, and photo-taking that happened in between.

And now I want to stop blogging because I have some cookies calling my name. So read the recipe and make it! Or not. But you won’t regret it, you may even want to take a photo to capture the beauty of bell peppers. And who would have thought peppers could be so pretty?

Recipe Rundown
Taste: Salty, tangy, savory, fresh.
Texture: The peppers are tender without being mushy, as is the orzo. My favorite part is the crisp cheese on top!
Ease: Easy but not necessarily fast.
Appearance: So pretty with the red, yellow, and green colors. Would look great on a dinner table!
Pros: This recipe is perfect as a light main dish or gourmet side dish, would be great for a picnic, potluck, or dinner party.
Cons: None, except the long cooking time.
Would I make this again? Yes, maybe with ground meat.

Pour the tomatoes and their juices into a large bowl and break them into pieces using kitchen shears or your fingers. Add the oregano, cheese, olive oil, garlic, salt and pepper. Stir to combine.

Slice the tops off the peppers and remove all the inner ribs and seeds. Cut a very thin slice from the base to help the peppers stand up.

Spoon the orzo mixture into the peppers. Place the peppers in the baking dish with the warm chicken broth. Cover the dish with non-stick foil and bake for 45 minutes. Remove the foil, sprinkle each pepper with cheese, and continue baking until the cheese is golden, about 15 minutes. Remove from oven and carefully transfer the stuffed peppers to serving plates. Garnish with basil, if desired. If sharing 3 pie-related recipes in 1 week is wron

Stop scrolling and RUN to your kitchen to make the

I think you guys are going to LOVE this new recipe

GIANT Chocolate Chip Cookies are a must for #natio