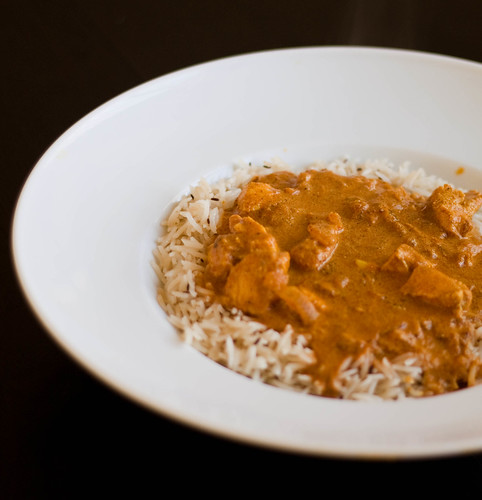 My first memories of Indian food were when I was young and my parents would meet up during their lunch breaks from work at an Indian restaurant that served a lunch buffet. Most of the time I would be in school but occasionally if I had a half-day or during a school break they would bring me along. The first time I tasted Indian food I was too young to really appreciate the depth of spices and flavors so unlike anything I had ever tasted before. I can remember thinking that Indian people must find American food so boring and bland. Most of the food was too spicy for me but I loved loved loved the garlic naan bread. Every year that has passed since that first taste of curry, cumin, and garam masala I’ve grown to enjoy the unique and complex flavors that symbolizes Indian cuisine. And it makes me think that it really is a shame that Indian cuisine isn’t more popular here in the U.S., especially Arizona.

Although I’m a fan of Indian food, this was my first attempt at cooking it myself. I hadn’t tried sooner because I tend to think of eating Indian as a kind of special occasion (although Trader Joe’s does have some fabulous Indian options in the freezer section) and also the thought of all those different spices and methods seemed daunting. When I saw this recipe for Indian Chicken Curry on Cooking for Seven I was surprised by how easy it seemed. Erica doubled the recipe which I actually found useful since I wanted to freeze some of the curry for those nights I work late and am too tired to cook.

Recipe rundown:
Taste: It wasn’t what I was expecting, probably because of the coconut. For that reason I think I might test some more curry recipes to see if I can find something I like better.
Texture: Creamy, tender, and the rice adds a nice bite.
Ease: There’s quite a few ingredients but only a handful of steps.
Appearance: Curry just isn’t very cute.
Expense: For me this dish ended up being expensive because I had to purchase nearly all the spices since I didn’t have any. Other than that it is affordable.
Pros: There was plenty leftover to freeze for later use.
Cons: The curry turned my wooden spoon yellow! Next time I’m using a silicone spoon.
Would I make this again? Maybe, I’ve got a whole slew of recipes to try now that I’ve finally braved Indian cuisine.
Indian Chicken Curry with Jeera (cumin rice)
From Cooking for Seven and All Recipes
1) Heat olive oil in a large skillet over medium heat. Saute onion until lightly browned. Stir in garlic, curry powder, cinnamon (if using) paprika, bay leaf, ginger, sweetener and salt. Continue stirring for 2 minutes.
2) Add chicken pieces, tomato paste, yogurt, and coconut milk. Bring to a boil. Remove from heat. Stir in lemon juice and cayenne pepper and remove bay leaf. Serve immediately.
Jeera (Cumin Rice)
Also from All Recipes

1) Heat the oil in a medium size saucepan over a medium-high heat. Drop in the cumin seeds, and cook until they splutter. Do not allow the cumin seeds to burn or become really dark brown in color. Add the rice and fry it in the oil for about 1 minute.

2) Add the water and salt and bring to a boil. Once the water is boiling, reduce the heat to low and cover the saucepan. Cook the rice for approximately 15 minutes. If you feel the rice is getting burnt near the base of the pan as it cooks, one trick is to place the saucepan on another flat pan or griddle which is directly on the flame. Toss with a fork.

Looking for a delicious spring dessert that doesn'

I think you guys are going to be very excited abou

Tag a chocolate lover who you want to bake these w

Anybody else celebrating their March/April birthda

Did you know you can make ice cream without an ice

Best frozen treat! 💙 This Easy No Bake Frozen B

😎 Here it is, the recipe that always breaks my